Icknield Archaeology is delighted to have been appointed by the National Trust to maintain a watching brief at Claydon House. The house, one of the most important buildings in Buckinghamshire, dates from the mid 18th century and replaced the former Claydon Manor House, which occupied the same site. The medieval church of All Saints, which served the former medieval village of Middle Claydon, is situated to the south of the house. The park was landscaped by James Sanderson of Reading between 1763 and 1776. 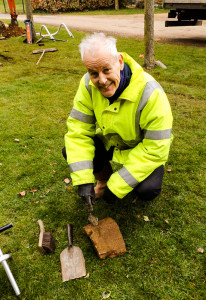 A new electricity cable is being laid across the park and archaeologists from Icknield Archaeology are in attendance to monitor the work and to record any archaeological remains which might be disturbed. The initial results are encouraging and include the discovery of an architectural fragment (piece of worked stone) from the cable trench, which may be from the manor house or the later building.