Visitors to this website from Linslade in Bedfordshire may be familiar with the Bedford Arms public house which was situated in Linslade town centre, close to the Grand Union Canal. This historic pub probably dates from the early 19th century and may originally have been named the ‘Corbett Arms’, serving bargemen loading and unloading goods at Whichello’s Wharf, which was situated nearby. The pub has recently been closed and a small housing development, incorporating the 19th century building, is planned at the site. Before building work took place, archaeologists from Icknield Archaeology were invited to investigate the pub car park, in order to discover if archaeological remains were present. 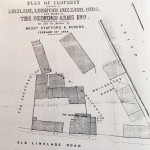 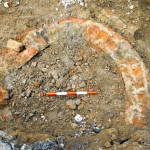 The Walls of the Well, Bedford Arms, Linslade 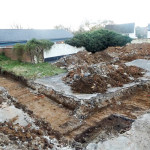 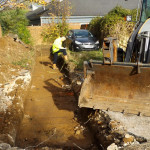 Little is known of the original layout of the pub but a plan prepared in 1888 shows the pub and the canal wharf with a range of buildings to the rear, which may have been stables or outhouses. The archaeologists discovered a number of brick walls in the rear part of the carpark which may be the remains of these outbuildings. The top of a brick lined well was also discovered, indicating that the buildings had their own supply of fresh water. A report on the results of the work is being prepared and will be available on-line and in local libraries.