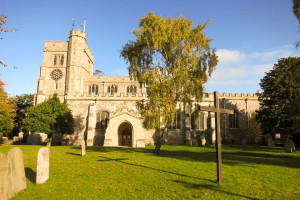 The historic town of Tring in Hertfordshire developed alongside the Roman road which linked London with St Albans and Cirencester. The town was mentioned in the Domesday Book, compiled for William the Conqueror in the year 1086 and it contains a number of historic buildings, notably the church of St Peter and St Paul.

A church has existed at the present site, north of the High Street, since the 12th century but much of what worshippers and visitors see today is of 15th or 16th century date. Like many other churches, it was renovated during the reign of Queen Victoria and between the years 1861 and 1882 the interior of the church was extensively modernized. After another one hundred and fifty years of continuous use, the 19th century tile floor in the south aisle and Lady Chapel required repairs and in October 2015 archaeologists from Icknield Archaeology were asked to monitor the removal of the floor surface and record what lay beneath. 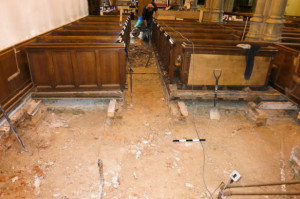 The 19th century tiles were removed by the building workers to reveal a spread of building rubble which was probably laid down as part of the 19th century renovations. The original medieval floor surface was removed at that time but, among the rubble, the archaeologist found some discarded fragments of carved stonework, which may once have formed architectural features within the church. A number of parallel brick piers, supporting a timber frame were also revealed. The church records indicate that the present oak pews were constructed in the year 1862, replacing earlier box pews, and it is likely that the discarded stone fragments, rubble and brick piers recorded by the archaeologist were put in place in order to support the new pews.

The stone fragments are to be returned to the church or will be preserved at the local museum and a report on the archaeological work will be made available on-line and in local libraries. 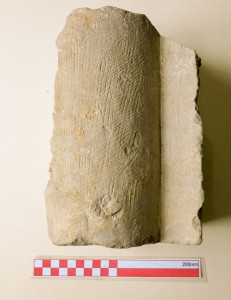 One of the stone fragments