Icknield Archaeology was called in to excavate trial trenches at the John Rankin School, Newbury, following proposals to extend the classrooms and car park. The school lies within the site of the Civil War First Battle of Newbury, which was fought on 20 September 1643 between the forces of king Charles I and the parliamentarian forces led by the Earl of Essex. Little is known in detail about the battle and as the school lies within the area of the battlefield, there was potential for artefacts from the battle to be disturbed.

Icknield Archaeology excavated trial trenches across the site of the new classroom and car park extensions, to establish whether any remains from the battlefield. The area was also scanned with a metal detector, with the specific purpose of locating musket balls and other artefacts.

No remains from the battle were found in the trial trenches. The evaluation successfully established that this part of the school probably doesn’t lie in the central part of the battlefield and the extension was able to go-head, without causing damage to the site. 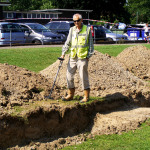 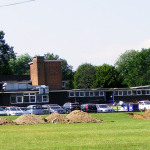 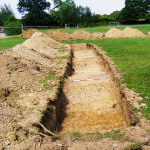