In October 2015 archaeologists from Icknield Archaeology returned to the Roman villa at Boxmoor in Hertfordshire. First excavated in 1861 by the local antiquarian Sir John Evans the villa was one of the most significant Roman buildings currently known in the Bulbourne valley. The main building had five principal rooms with projecting wings and lay within a rectangular enclosure. Further buildings are likely to be situated in the surrounding area but these have not been excavated.

A local resident has put forward proposals for a small housing development adjacent to the main villa buildings and invited Icknield Archaeology to undertake an initial archaeological evaluation of the site. In their second project connected with the villa, Icknield Archaeology discovered fragments of Roman pottery and a Roman ditch, perhaps once part of the villa grounds or a field boundary.

The biggest surprise was the discovery of prehistoric pottery fragments and worked flints, dating to the Neolithic or Bronze ages. Prehistoric flints have been recorded in other parts of Boxmoor, but this is the first evidence for prehistoric occupation at the site of the villa. The Romans were not the first occupants and the flints are currently being examined by specialists, who will be able to tell us more of the early history of the site. Watch this space! 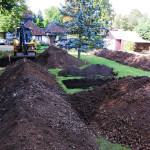 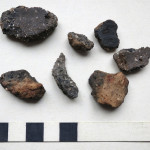 Examples of the prehistoric pottery 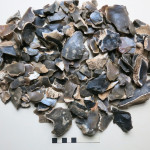 Some of the prehistoric flint