During vegetation clearance of a small plot of land situated between the graveyard of the Old Church and the overgrown verge of the principal north-south lane through Christmas Common near Watlington, Oxfordshire, a sunken feature was revealed. A photographic record and measured sketch  was made. The observations suggested that it was some kind of cistern or well which later this interpretation was confirmed by cartographic research. To judge from the character of the brickwork this feature belongs to the late Victorian period. Its location would suggest that it was a communal well built to serve the local community which fell out of use when piped water was brought to the hamlet, possibly at the same time when the Forest cottages were built 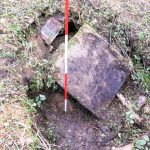 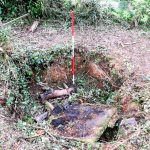 View all posts by: Allan Davies