Icknield Archaeology is pleased to have been commissioned by Sports England to prepare a report for publication on the results of work undertaken at Bisham Abbey during 2012 and 2013.

Bisham Abbey is situated on the bank of the river Thames, close to the town of Marlow. In c.1135 the site was established as a Preceptory (headquarters) of the Order of the Knights Templars, who built the manor house in c.1260. The Templars order was suppressed by King Edward II in 1307 and Bisham passed to the king. The site was later purchased by Sir William Montague in 1334 who established a Priory of Augustinian Cannons on the site. The Priory was dissolved by king Henry VIII and many of the buildings were demolished the following year. In 1540 the estate was granted by the king to Anne of Cleeves as part of their divorce settlement. It subsequently passed to the Hoby family, who occupied the site until 1866. Many of the present historic buildings date to the era of the Hoby family. The site was used as a military hospital during the first and second world wars and in the mid 20th century was let to the Central Council for Physical Education.

The site is now accommodates the National Sports Centre and much of the area to the east and north of the historic buildings has been laid out as sports pitches or is occupied by modern buildings. The archaeological work was undertaken in advance of modifications to the sports pitches and the construction of new buildings. 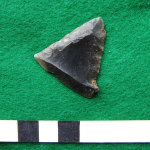 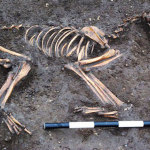 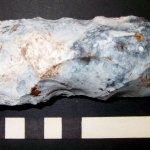 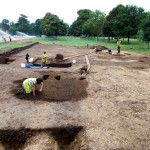 The archaeological work immediately took the story of the site back into prehistory, beginning with the Neolithic and Mesolithic periods and a number of flint tools, including a Mesolithic adze blade (flint cutting tool), were uncovered. A settlement may have existed at Bisham during the succeeding Bronze Age. Little trace of this was revealed but a number of shallow pits, containing charcoal and burnt flints were present. The function of these pits is unclear but they may have been used for heating or for the preparation of food.

Investigations west of the medieval buildings indicate that a Roman masonry building, perhaps a ‘villa’ may have existed in the area. The archaeologists found a number of Roman period enclosure ditches within which fragments of roof tiles and bricks, perhaps from the villa, were present. A silver coin of the emperor Philip I was also found.

The archaeological work has also increased our knowledge of the priory itself. The principal historic buildings themselves are not within the development area but the works provided the opportunity to investigate the surrounding moat. Traces of the moat can still be seen at a number of locations and the development work provided the opportunity to investigate a short length near its southeast corner, where it had been refilled with a deposit of natural chalk.

View all posts by: Allan Davies